Simple Rules for Costumes at Work 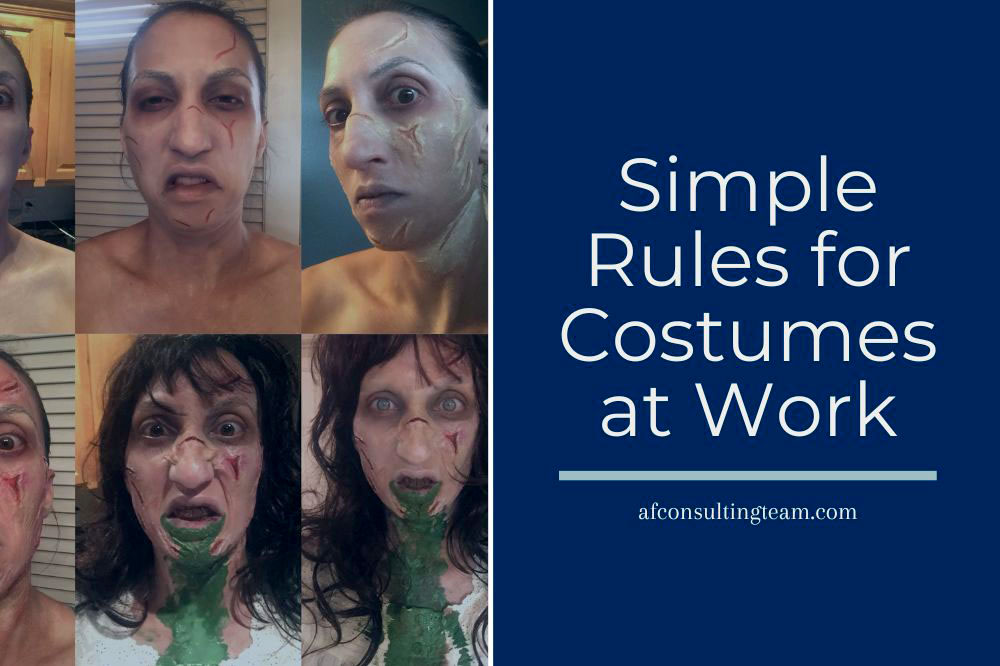 It’s officially spooky season, and depending on your company, you may or may not be allowed to don festive wear in the most wonderful month of the year. And while most work environments will have a sense of humor, many will not. So here are my top tips (or rules to adhere to) when planning your costumes for the office:

1. Anything that prevents you from actually DOING your job. This is a rather broad one, but if you sit for 99% of your job, maybe don’t wear a Lobster tail bustle or an illusion-heavy costume. Most of my all-time favorite costumes require 3-6 feet of space on all sides, which is great for Covid, but not exactly conducive to office life. Keep that in mind. 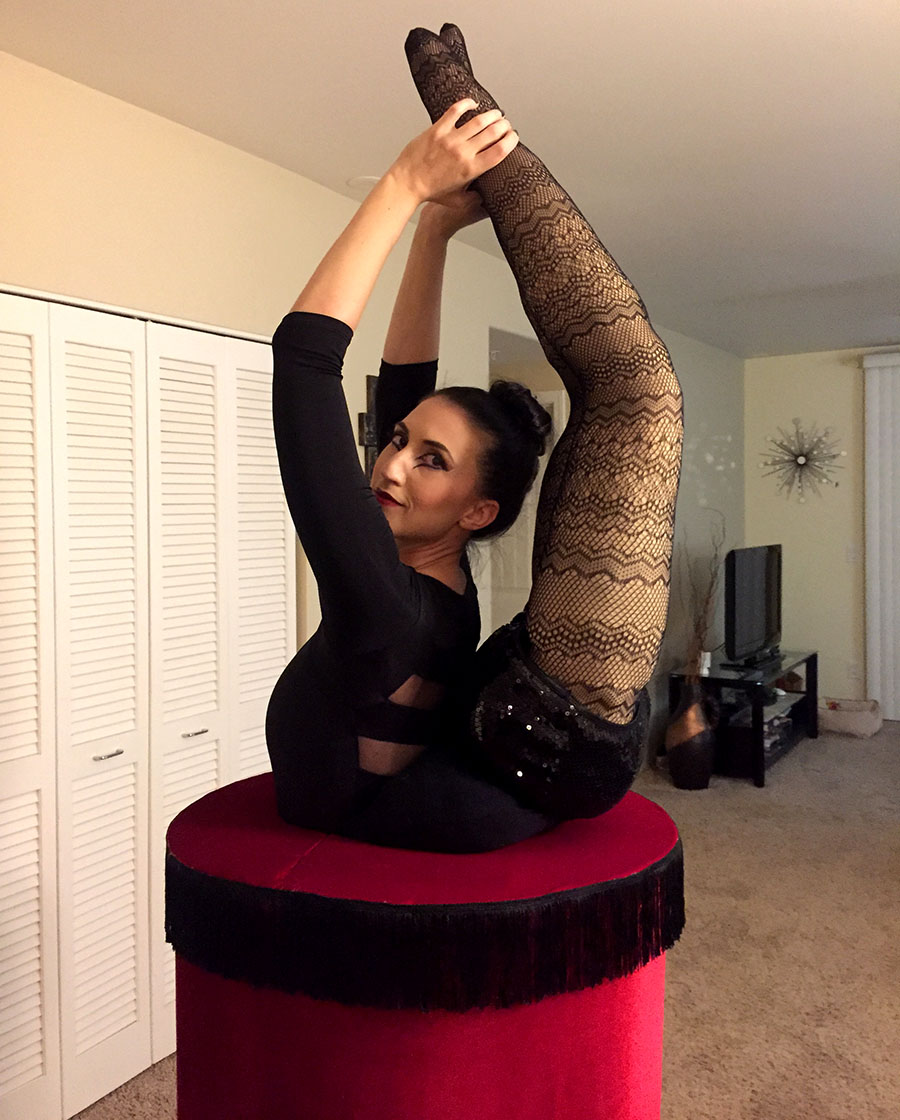 2. Anything with grotesque, heavy, or generally disturbing makeup. Again, this is broad, but if you’re going to make someone puke or call a priest, or both, maybe save that for the after-hours soirees.

3. Anything that directly insults your boss or a co-worker. Some people have a sense of humor and some most definitely do NOT. If you are planning a costume to mock someone who actually works IN your office, then you might want to get the go-ahead from HR, a superior, or even the actual person! Don’t lose your job because you were “trying to be funny.”

4. Anything that directly insults the company. See above. It’s one thing to dress as the office copier you all hate and quite another to dress as “the world’s worst place to work” sporting your company logo. Again, don’t get fired … unless that’s your plan, in which case, go crazy!

5. Anything too controversial. I know! I’m such a buzzkill, but the purpose of Halloween is to have fun, not to start a fight with Sheila in accounting. I usually lump politics, religion, current events, aggressive organizations (even charitable ones), and anything along those lines into one category. If you want to make that statement outside of the office, go for it, but what you do on Halloween still affects you in November, and you never know who these days is offended by what.

6. Anything overtly sexual. Hey, did you know I also perform Burlesque? Yeah, I do, so when I say don’t be too sexy at work, I’m not trying to stifle your creativity. There is a time and a place for everything, and unfortunately, that’s not work. If you want to do anything you want, then maybe you should be your own boss. I can help with that, too!

7. Anything with weapons. I appreciate authenticity as much as the next girl, but did this one even surprise you? It sucks to be a cowboy without your six-shooter, but unless it’s the obnoxiously orange toy gun from the kid’s section, leave it at home. You can still be a killer pirate while sporting a foam cutlass or a giant Chucky doll with a clearly fake butcher knife. It’s going to be ok, promise.

1. Anything clever or witty. I love a good pun or play on words, so if you have a costume idea in that vein, I’m 100% for it. If you need some inspiration, here are a bunch of (varying degrees of) funny ones.

2. Anything work-inspired. A nanny dressing as Mary Poppins? A travel agent as Carmen San Diego or Waldo? A vet as a cat? All the yes! Everyone loves a good theme, so lean into your profession with a whole new dedication!

3. Mullet costumes. No, not actual mullets (though I have worn many, so I’m not actually against these). What I mean are costumes that can transform from business in the front to party when you’re back at your desk. The easiest example I can give would be dressing in a black suit, but also wearing cat ears. It’s kind of a cop-out with regard to Halloween costumes, but it’s extremely easy to pull off no matter what your office policies are on costumes.

4. Anything humorous. Yes, not everything is funny to everyone, but if you can find something entertaining and functional, you’ve found a workplace winner.

5. Group costumes. What better way to showcase office camaraderie than with a pre-planned group costume? Bonus points if you also make it workplace relatable—I would love to see the athletic department of a high school all dress up as different sports trophies or aquarium workers dress as a school of fish, with the boss as a shark, or a group of office workers dress as the ladies from 9-5 or the cast of The Office … 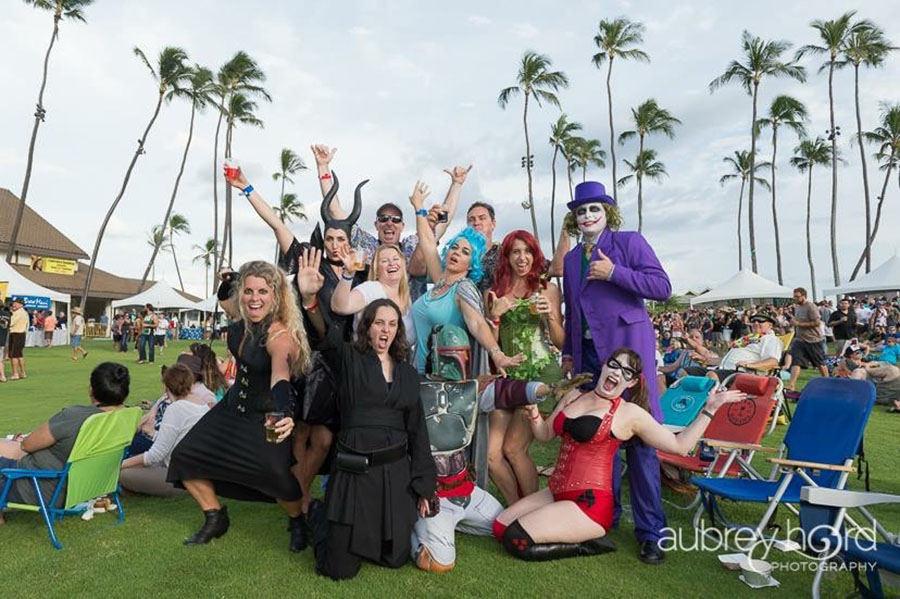 6. Self-deprecating. Are you the boss? Why not try a notorious villain costume?! Did you mess up on a giant project? Don’t be afraid to dress up as a janitor! Known as the office police? Well, if the shoe fits, why not wear it? Most everyone will appreciate some self-directed, light-hearted humor. But again, use discretion.

Halloween is supposed to be fun, so the overwhelming theme of anything work-related should be fun, easy-going, and appropriate. It’s only a killjoy if you perceive it that way. And above all, if you look in the mirror and wonder if you’re going to get away with your costume choice, the answer is no, no you will not, so always go with your gut (or guts for you zombies).